Good evening everyone! Today was our last full day in Rome (we leave by train for Florence tomorrow) and it was the day we saw a couple of the major sites that people (like us!) travel all the way here to see. We had a day tour of Vatican City scheduled at 9am and one of the Colosseum/Forum at 2:30pm, so we got up early to prepare for the day and get over there. Our alarm was set for 6:30am, and we quickly got ready to make it to the breakfast room by 7. Breakfast was fresh-tasting and great; I had scrambled eggs, bacon, a slice of berry pie, and some plain slices of turkey for extra protein. We had to get to Vatican City by ourselves since the tour meeting spot was there, so we took a taxi from our hotel there.

The taxi ride was about 30 minutes so we were a bit early. We waited for our tour by the steps across from the Vatican museum, and our tour started promptly at 9am (it was 3 hours overall so it ended at 12). Our guide gave us some information on what we would be seeing and showed us some interesting landmarks outside, then led us through the museums. We passed through an Egyptian museum, a museum of maps, and some apartments belonging to former popes. Everything was very impressive and learning about all of the immaculate art was interesting. After finishing at the other museums, we walked through the Sistine Chapel. It was smaller than I had always thought and I was disappointed we couldn’t take pictures, but it was still beautiful. I tried counting how many detailed people were painted and I lost count around 80 just looking at one portion of the ceiling. We had 30 minutes admiring the Sistine Chapel and then as a tour group we went through Saint Peter’s Basilica. I loved the architecture in there, and it was amazing to see all of the people praying and getting holy water- there was so much activity in there. After seeing the basilica our tour was over, so we went to eat lunch.

We exited Vatican City and found a pizza place called PizzaZizza across the street from the exit. It was actually hilarious as there were two pizza places right next to each other and the owners were fighting about stealing customers as we walked in- they were so animated when they spoke and watching them was so entertaining. The staff were very friendly and the pizza was very good plus their restaurant was different than most: there isn’t a menu, they just bring out mixed plates of individual slices of different kinds of pizza. We also got a plain margherita plate, but I tried a bit of everything. In Vatican City we all had to wear pants (knees and shoulders must be covered for entry) but it was extremely hot, so we changed into shorts in the restaurant’s bathroom. After we were ready to go, we called a taxi to take us to the Colosseum for our next day tour. It was only a 20 minute ride, but it still was a distance too far to walk in the heat.

We arrived at the Colosseum an hour before our tour began so we walked around a bit beforehand. Our tour was 3 hours again and unfortunately we didn’t cover much ground. Our tour guide had a lot of technical difficulties with his microphone and just trouble guiding us in general so we spent the first 2 hours just trying to get through one floor of the Colosseum, then we had to leave to make it to Palentine Hill. It was very tiring and draining overall since we were basically just standing in the heat and not moving that much for the first couple hours. Our guide led us up a bunch of stairs leading to Palentine Hill and we looked at the ruins of the buildings. It was quite pretty once we got up there but he didn’t give us much background information and I was unfamiliar with the site so I only really saw it for it’s surface-level beauty. It took us an hour to get situated and walk through there, so the tour ended before getting to the Forum. We had the option to walk around there by ourselves, but my family was so exhausted that we only took a quick look and snapped some pictures before leaving for dinner.

We walked back in the direction of our hotel while looking for a place to eat dinner, and we found a nice little (air conditioned!!) restaurant off a side street on the way. I got a steak just because it sounded good and I really needed the protein for energy, and it ended up being very nice and juicy. We didn’t have any other plans for the rest of the day/night and we knew we probably wouldn’t do anything else since we were so tired and sore from the day of tours and walking in the heat, so we relaxed and took our time while eating. After dinner, we continued walking back to our hotel and stopped for gelato. I got an Oreo flavor and it was delicious as always, and then we finally got back to our room. Tomorrow we leave by train for Florence, so we had to pack up our belongings again and just rest up to gain energy for the travel day.

In case any of you are wondering, our tours were both booked with the company CityWonders. I wouldn’t necessarily recommend them after today’s experiences, but a lot of it also had to do with our own personal fatigue and dealing with the heat. However, I also found the tour guides a little boring and stiff (not sure how else to describe them), and even though we were aware of it at the time of booking, it was a bummer they didn’t offer any forms of transportation each way. I’m sure there are people that have great experiences with them on different tours but it really depends on your guide and their style of tour-giving. For example, our guides went through very slowly by standing around at each spot which got us behind schedule, and we didn’t do as much walking around. Either way, today was very draining and a bit disappointing as we didn’t get to see as much as we thought we would; however, I’m still glad we had the experience and that we at least hit the main sites of Rome before leaving. The city is definitely beautiful and I’m sad to leave before getting to know it a bit better, but it hasn’t been my favorite so I’m looking forward to moving on and seeing Florence! I will update you all tomorrow with our latest adventures.

The ceiling in the museum of maps.

Different angles of St. Peter’s Basilica and its wonderful architecture.

Our view as we exited the basilica.

The building we had a view of as we exited Vatican City. 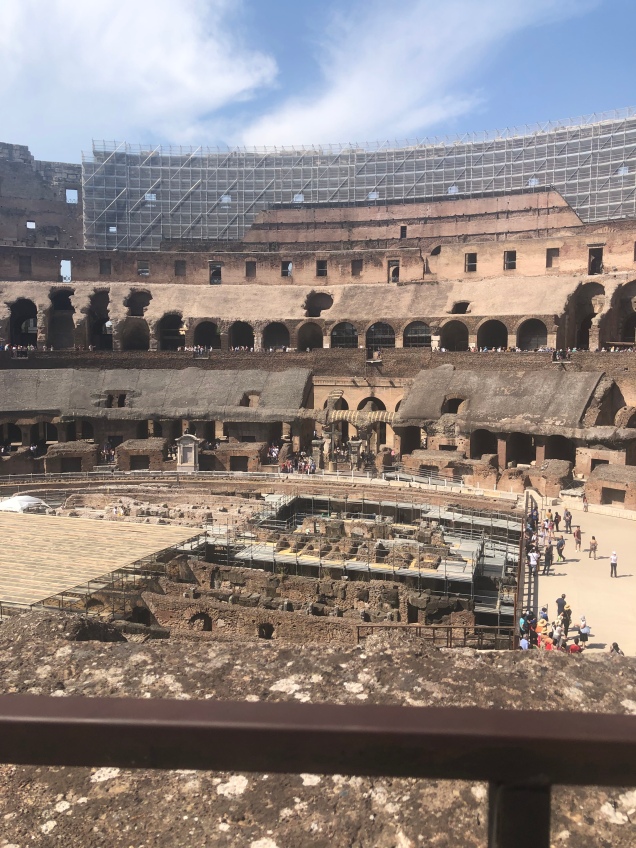 The view of the first floor from the second floor of the Colosseum. 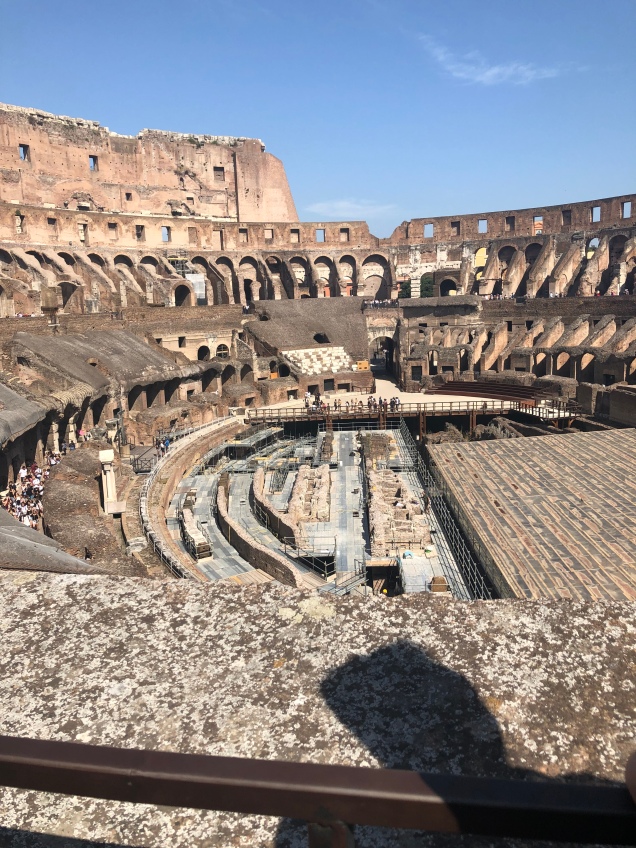 Another angle of the first floor from the second.

Some of the ruins we saw on Palentine Hill, lots of pretty grass here.

Some views as we got closer to the Forum. 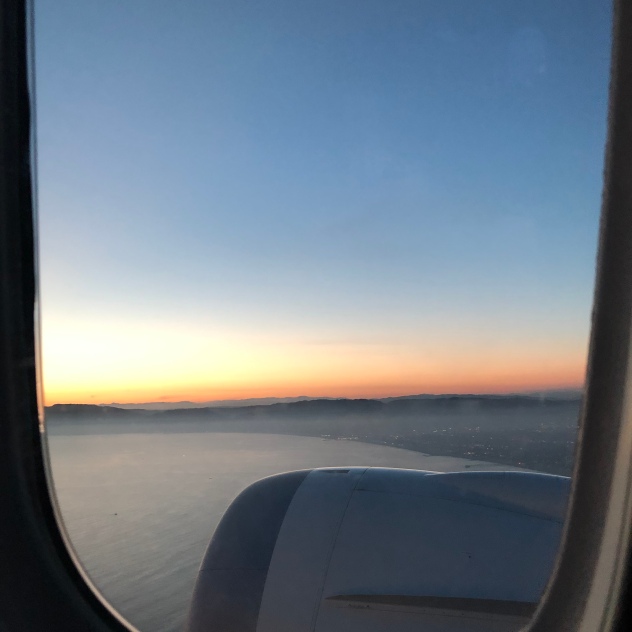 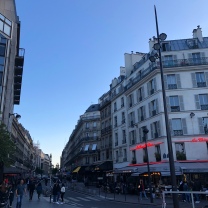 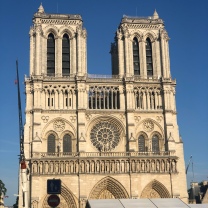 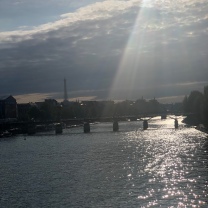 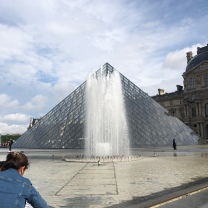 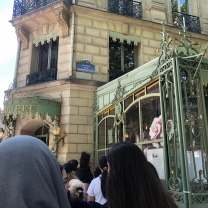 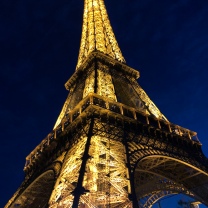 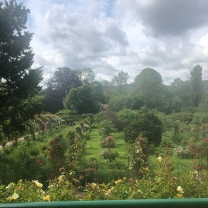 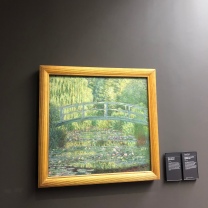 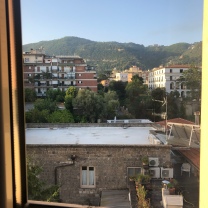 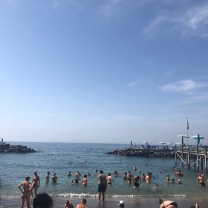 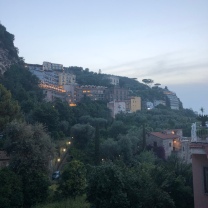 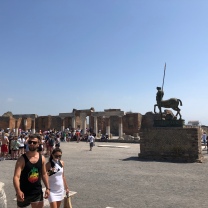 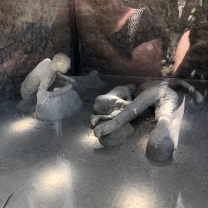 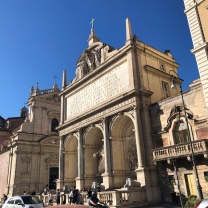 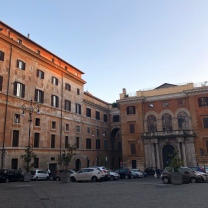 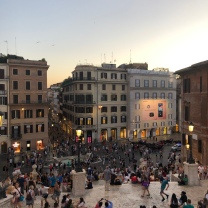 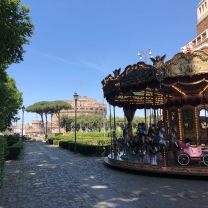 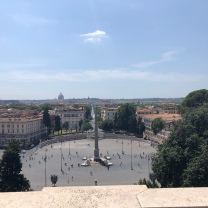 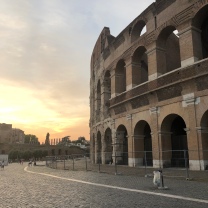 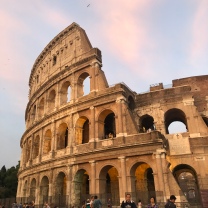 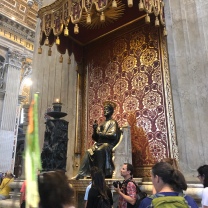 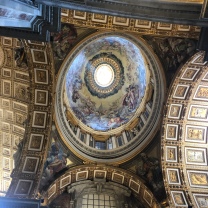 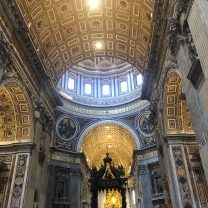 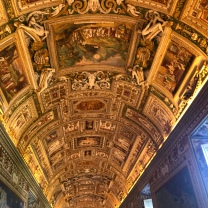 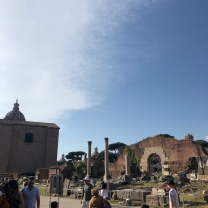 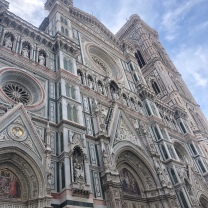 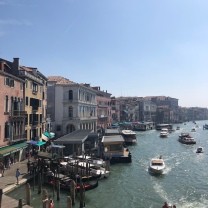